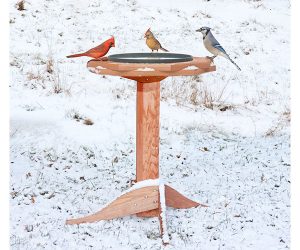 As the weather gets colder and natural seeds and nuts become scarcer, more and more birds will be visiting your feeders – but food and calories aren’t the only things they’re going to be looking for. Liquid water becomes even scarcer in winter. Feeders are an essential component of your backyard birding habitat, but they’re not the biggest draw for birds. In winter, liquid water will draw many times more birds than even the most attractive feeders.

Keeping liquid water in your backyard is less of a challenge than it might seem. The Songbird Essentials Birdbath & Multiuse De-Icer will fit most birdbaths, and is completely safe for birds. The surface won’t get too hot for them to touch, nor take up too much electricity. The De-Icer is controlled by a built-in thermostat. The heating element will only switch on when the water is just above freezing and will maintain it at that temperature. It will turn on and shut off automatically. The projected power usage is pennies per month.

Most heated birdbaths – that is, full baths with their own heating elements built in – are also controlled by thermostat, are similarly cost-effective to operate, and can be used year-round. Our most versatile heated birdbath is the Songbird Spa, which can be mounted to a deck railing with a clamp or plate mount and comes with stakes for a ground mount option. The Songbird Spa is easy to clean. The bath lifts right out of its holder. Other heated birdbaths can also be mounted on decks or, like the Songbird Essentials Heated Cedar Birdbath, come with stands.

One of the best features of a well-maintained birdbath is that they will draw many more birds than might otherwise visit your feeders otherwise, including birds that aren’t primarily seed-eaters. Not only will liquid water attract a greater quantity of birds, but also a wider variety. Last winter, nine out of ten stories about bluebirds that we heard in the store started with birdbaths. Bluebirds visit seed feeders on occasion, but they’ll more readily make a habit of visiting fresh water. A heated birdbath is a great way to draw in as many bluebirds to your backyard as your area will support – and to see if it’s worth investing in a mealworm feeder or bluebird house, if you haven’t already.

Fall is upon us with winter close behind. A stroll through local parks amid our autumn colors is always a delight this time of year. Take note of the abundant natural foods available for wildlife as you go.

Seed heads heavy with seed will be bent over, acorns will be scattered about the undergrowth, and berries will be heavy on the stems. Native plants and trees you may find include Sunflowers, Serviceberry, Red Cedar, Wild Plum, Black Cherry, Oaks, Basswood, Beautyberry, Dogwood, Hawthorn, Sumac, Virginia Creeper, Coneflower, Liatris, Asters, Black-Eyed Susan, Native Grasses, Winterberry, and others. Many of our native plants look like a weed, yet they are nature’s grocery store for our wildlife. You will likely find some of these natural foods in your yard. Along with the wild food, fall provides leaf litter on the ground that is winter nesting material for birds, squirrels, and bugs.

The Missouri Department of Conservation recommends leaving the native foods and litter where they are for the birds and critters. We can help our local wildlife by leaving and encouraging such native resources in our yards. Fall is the prime time to expand your native perennial plants either by division and replanting or by purchasing starts from local growers. Adding a reliable source of fresh water, such as a heated birdbath, and seed and suet feeders to supplement the wild harvest will attract and help support your local wild residents through fall and winter. Future benefits will show themselves in years to come.

Fall also brings the shortened daylight hours that triggers the migration of birds. September is often the month we see the most activity at feeders from migratory birds. Birders have a great opportunity to take pictures in the fall as the birds offer unusual opportunities to see them as they move through on their way south. Cameras and binoculars are often in our pockets as we stroll about our parks. Songbird Station offers a wide variety of feeders, baths, and optics to meet your needs and budget. Utilitarian or decorative there is something for every bird lover and a variety of seeds and seed blends for every bird species. Take advantage of Nature’s bounty in the native plants, add a few strategically placed feeders, and use your binoculars to watch the show! 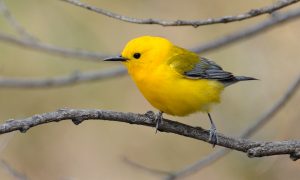 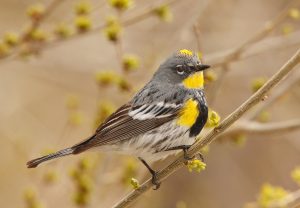 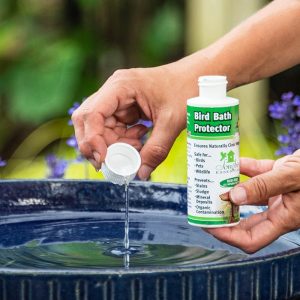 Keeping feeders clean is an ongoing part of feeding the birds and will keep the feeders looking good and minimize the spread of disease. They should be cleaned as needed, but you should plan to clean them at least every two to three months. If you notice sick or diseased birds visiting the feeders, it’s time for a cleaning to stop it from spreading. If the seed gets wet and moldy in your feeder, be sure to disinfect the feeders as the mold can be harmful to birds. The cleaning task is typically an outdoor activity, so your schedule should include cleaning in November before it gets too cold, then again in February when it starts to warm up. A 10% bleach or vinegar solution is best for cleaning because it effectively disinfects the feeders. Be sure the feeders are thoroughly dry before refilling as these solutions are non-toxic once they dry out. Fill up a large container like a trash can, with the solution and submerge your feeders. If you have the time this is a good method to clean all of your feeders at once. Let each feeder soak for a few minutes as the scrubbing will be easier. The Songbird Essentials birdbath and feeder cleaning brushes are specifically designed with long sturdy bristles to clean all of the nooks and crannies. Use one of our many shapes and sizes of bristled bottle brushes to clean tube feeders. While you’re at it, dump out the birdbath and disinfect it too. Be sure and dump as much water out of the feeders and baths as you can and place them in the sun to dry. For stubborn cleaning jobs use a product like Poop-Off that is specially designed to remove bird droppings. Remember to pick up a bottle of Birdbath Protector that helps minimize algae growth and mineral and sludge deposits. 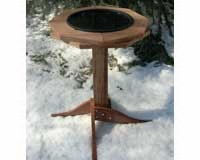 A guaranteed way to increase your backyard activity!

What’s a sure way to attract birds to your feeders? Offer water… especially in winter! About 70% of a bird’s non-fat body tissue is water that needs to be maintained to avoid dehydration. Birds find some water in natural food sources: insects, berries, and even from snow, but when those supplies dwindle, the water YOU supply is even more vital!

Open water in freezing weather will attract as many or more birds, as a well-stocked feeder! Birds use it to help keep themselves warmer in the winter.

By cleaning their feathers and grooming them with natural oils, our feathered friends are able to help insulate their bodies from cold.

You can keep water thawed with a submersible heater placed directly in the water. It’s economical and safe, as long as you use a high-quality, outdoor extension cord to plug the heater into an electrical source.

In winter, use a rough-surfaced, plastic saucer for a birdbath. Ceramic and concrete ones, though fine for summer use, will crack easily in frigid weather.